Ranger Uses Stun Gun on Man with Off-Leash Dog in San Mateo County -
So, everyone sees this headline and fifty percent of the bunch blasts the federal park ranger - I'm going to hope it was a knee jerk reaction and that readers really didn't do so after having read the story, but I'm not banking on it. It's just a given in society today that too many see the side of the law as the bad guy (insert ironic joke here), because they're "the man," man.  How unfortunate.
Apparently, Gary Hesterburg was walking his two dogs off-leash when he was approached by the officer, who tried to detain him in an effort to educate Hesterburg on the leash laws.  The man repeatedly tried to walk away, as well as give a fake name to the ranger.  It was on a repeated attempt of leaving the scene that she pulled out a stun gun and nailed him.
Here's a thought; don't walk away from a federal officer (or any for that matter) who is detaining you, and don't give falsified information.  I'm constantly amazed at how indignant people get when caught breaking a law or acting inappropiately.  It's not like the officer broke his kneecaps or even arrested him, but he was acting inappropriately!
I'm certainly no saint myself, but even if I'm breaking a law that I disagree with ("I didn't realize I was going so fast, Officer..."), when I'm caught, I'm caught.  Officers of the law aren't always in the right - far from it.  I've had those experiences too.  But in this case, I can't see a thing wrong.

FOLLOW UP:
The following report has come from KTVU.  If the investigation proves that what the witness has stated is true, this will shed a new light on the case and an ammendment to my above opinion.
Officials To Review Ranger's Use Of Tasing On Dog Walker
Posted by Kymberlie ~ WriterOfTheStorm.com at 2:28 PM No comments:

Many in the crowd outside Oakland City Hall shouted "Burn it! Burn it!" as masked protesters readied to set fire to an American flag. That's when a woman emerged from the scrum, screaming for them to stop, that it would hurt the cause. 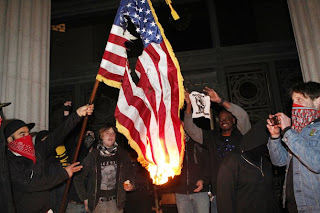 Moments later, the flames began, and suddenly a movement that seemingly vanished weeks ago was back in the spotlight, this time for an act of protest that has long divided the nation and now the movement itself.
The images of the flag-burning went viral in the hours after Saturday's demonstrations on Oakland's streets, with Occupy supporters denouncing the act as unpatriotic and a black mark on the movement. Others said called it justified.


The flag-burning, however, raised questions about whether the act will tarnish a movement of largely peaceful protests and begin to alienate people who agree with its message against corporate excess and economic inequality.


Click here for full story.
Posted by Kymberlie ~ WriterOfTheStorm.com at 2:01 AM No comments:

Two weekends ago, the Occupy movement picked up in Oakland after a winter holiday hiatus.  The continued chaos is apparently causing local independent business owners to close up shop, according to a KRON-4 report.
It was on Saturday, January 28th that things ended violently, once again putting the city of Oakland in the national spotlight.

For weeks the protests had waned, with only a smattering of people taking to Oakland's streets for occasional weekend marches that bore little resemblance to the headline-grabbing Occupy demonstrations of last fall.

Then came Saturday, which started peacefully enough -- a midday rally at City Hall and a march. But hours later, the scene near downtown Oakland had dramatically deteriorated: clashes punctuated by rock and bottle throwing by protesters and volleys of tear gas from police, and a City Hall break-in that left glass cases smashed, graffiti spray-painted on walls and an American flag burned.

More than 400 people were arrested on charges ranging from failure to disperse to vandalism, police spokesman Sgt. Jeff Thomason said. At least three officers and one protester were injured.

KGO's Kristin Hanes was covering the daylong demonstrations in downtown Oakland on Saturday evening when police corralled several hundred protesters in front of the YMCA building on Broadway and began a mass arrest.

Law enforcement officials gave an order to disperse but did not give any directions to protesters on where or how to leave. Within minutes police announced the group had failed to disperse and that they were all under arrest.

Hanes tried explaining to several officers that she was a member of the press and showed them her credentials. However, she was told her press pass was only good for San Francisco and not the city of Oakland.

Hanes had been reporting on-air and was sending out messages on Twitter before and after her hands were cuffed and read her Miranda rights.

She also posted a note on Facebook where she wrote: "Tonight, I was arrested for doing my job, being a news reporter, covering an Occupy Oakland rally. Arresting officer: "Do you have any knives, guns, weapons?" Me: "Of course not, I'm a reporter." Officer: "That might be the most dangerous of them all." Finally, I was released. Whenever journalists are arrested for reporting the news, everyone's freedom is at risk. That is what frightens me the most."

Click here for full story and to hear Kristin Hanes' audio report.﻿
Posted by Kymberlie ~ WriterOfTheStorm.com at 1:40 AM No comments:

SAN FRANCISCO (CBS SF) — A man was arrested for using a baseball bat to threaten a parking control officer that put a parking boot on his car in San Francisco’s Inner Parkside neighborhood on Wednesday, police said.

The female parking control officer called for assistance around 12:20 p.m. Wednesday in the 2100 block of 15th Avenue, where she had been placing a boot on a car wheel when the owner approached and threatened her with a baseball bat, according to police.

The man, whose name was not immediately available, denied threatening her, saying he was just getting the bat and other baseball equipment out of the car.

However, a witness heard the threats and the man was arrested on suspicion of brandishing a weapon on a parking control officer, police said.

Welcome to the launch of The Bay Area Collective.  We'll be bringing you news stories collected from around the San Francisco area, city and suburbs, as well as opinion, reviews, and welcoming all of your comments and opinions alongside ours.  Thanks for taking the time to stop by!

Are you sorry to see 2011 fade in the rearview mirror, or happy to see it go?

Posted by Kymberlie ~ WriterOfTheStorm.com at 3:11 AM No comments: